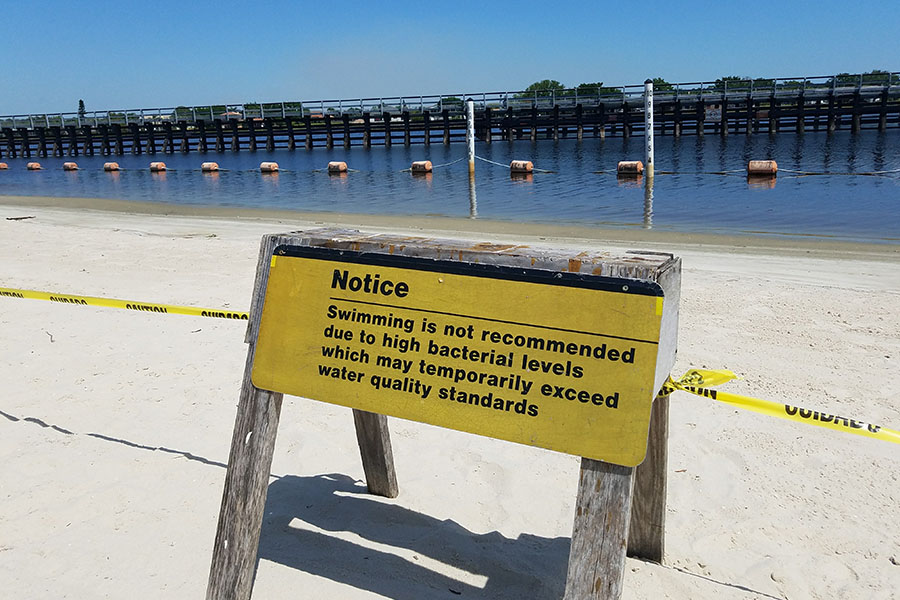 In our own front yard:

Enterococci bacteria can cause gastrointestinal illness, infections and rashes. Fecal indicator bacteria, in the past, primarily occurred during the wet season where storm water runoff carried bacteria to area lakes, streams, creeks and rivers. But, the new normal sees contamination exceeding thresholds during the dry season. Historical data going back more than a decade bears this out.

Environmentalists are often accused of being naysayers, but this fecal storm is real. Fecal indicator bacteria cooking in our local waters does not present a pretty picture. This represents a nightmare scenario for our local tourism and real estate sectors, in addition to serious public health risks.

How many jobs will be lost if tourism takes a nose dive? What would be the cascade effect on southwest Florida’s economy? Consequently, many government officials and business representatives take a shortsighted perspective and downplay the problem even though we will all lose in the long run.

How did this happen? This crisis represents a perfect storm of lax enforcement and under funding at the local, state and national levels. A closer look at how Florida water policy and its implementation evolved over the past decade proves revealing.

For instance, county health units that conduct bacteria testing in beach areas are seriously underfunded considering the magnitude of the problem. Florida stopped funding the Healthy Beaches program in 2011 and now depends entirely on federal funding.

We saw another insidious incident last year when the governor and legislature attempted to loosen the thresholds on toxic substances in our waters. To facilitate this action, the Governor refused to appoint two members representing local government and the environment to the Environmental Regulation Commission. The commission voted 3/2 in favor of elevating toxic concentrations in the water. The legislature did nothing to stop it. Fortunately, the courts approved an appeal to stop it.

The governor took considerable criticism in 2016 for his delayed response to the toxins originating from the cyanobacteria bloom along the St. Lucie and Caloosahatchee Rivers. He eventually declared a state of emergency in three counties.

To help address the growing problem of harmful algal blooms (HABs) and cyanobacteria, Florida Waterkeepers, led by the Calusa Waterkeeper, have asked legislators to reinstate the Florida HAB Task Force. The response to date has been that it would not be a popular budget item.

Floridians want clean waters and a healthy environment, but this generally ranks low on political priorities. This must change. Please, speak out and become involved in advocating for better water quality.