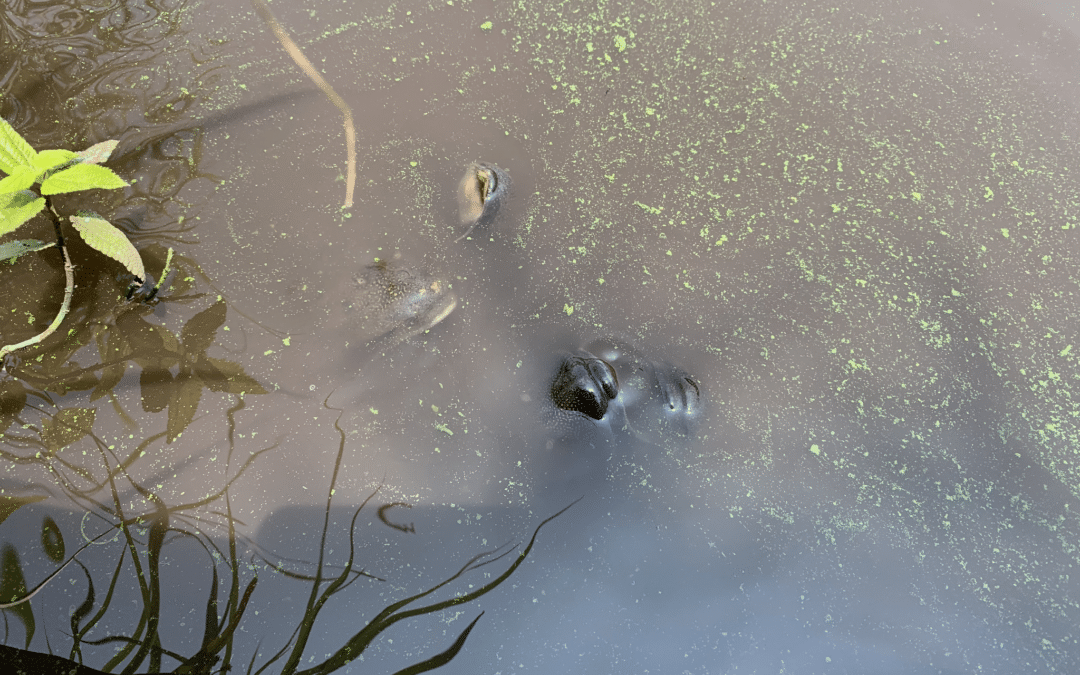 After massive and recurring blue-green algae blooms in Florida waters that resulted in multiple “states of emergency” issued by then-Governor Rick Scott in 2016 and 2018, the Florida Department of Health (FDOH) is still unable to consistently warn the public of the toxic blooms.

Governor DeSantis appointed experts to the Blue-green Algae Task Force in 2019, and they recommended that FDOH and Department of Environmental Protection (FDEP) work together to develop defensible health advisories and water quality criteria for blue-green algae. “Despite the FDOH claim that they had a consistent statewide policy for posting signs about the dangers of blue-green algae, the facts on the ground contradict that assertion as it has since been revealed the policy is to be implemented on a voluntary basis by each respective county health unit. That is the root of inconsistent messaging and policy, leading to increased risk to public health,” says Calusa Waterkeeper, John Cassani.

To date, neither FDEP nor FDOH have developed the advisories or standards the Task Force recommended in their Consensus Document issued in October 2019. Instead, FDEP has kicked recommendations back to the Task Force for further deliberation. A March 2020 Task Force meeting was canceled due to COVID-19, so the group has not met in over nine months.

The ensuing void has left Florida citizens largely unprotected from the dangers of ongoing blue-green algae blooms linked to liver cancer and neurodegenerative diseases like ALS and Alzheimer’s Disease. Two scientific studies have identified liver cancer clusters among people in south Florida associated with communities that have public water supplies sourced from surface waters such as Lake Okeechobee. Additionally, a 2019 scientific article of stranded dolphins in Florida and Massachusetts reported all the Florida dolphins (except for one boat collision fatality) had high concentrations of BMAA, a neurotoxin produced by blue-green algae.

Between May 15 and June 30, 2020, four Florida Waterkeeper organizations conducted a survey of public access points along the Caloosahatchee River, Lake Okeechobee and the St. Johns River. The purpose of the survey was to determine if FDOH warning signs had been consistently posted in these areas which have all had or are having, recurring blooms of blue-green algae with toxin concentrations documented by FDEP.

The results of the survey [map] were that 22 (71%) of the 31 access points had no FDOH warning signage of any kind, even during active blooms documented with toxins. Only 9 locations (29%), had an FDOH sign with some relevance to blue-green algae–typically an FDOH Caution or Alert sign. At Lake Okeechobee Canal Point public access area, FDOH Palm Beach County Health Unit had posted a sign warning of red tide–which is a marine alga–adding further confusion about the health risk to the public.

Lisa Rinaman, St. Johns Riverkeeper, stated, “It is critical that Floridians are protected from toxic green algae. As more of us are seeking refuge in Florida waters during the pandemic, the Blue-Green Algae Task Force must address the need for appropriate health warnings and to prioritize getting to the root of the problem and stopping nutrient pollution at its source.” 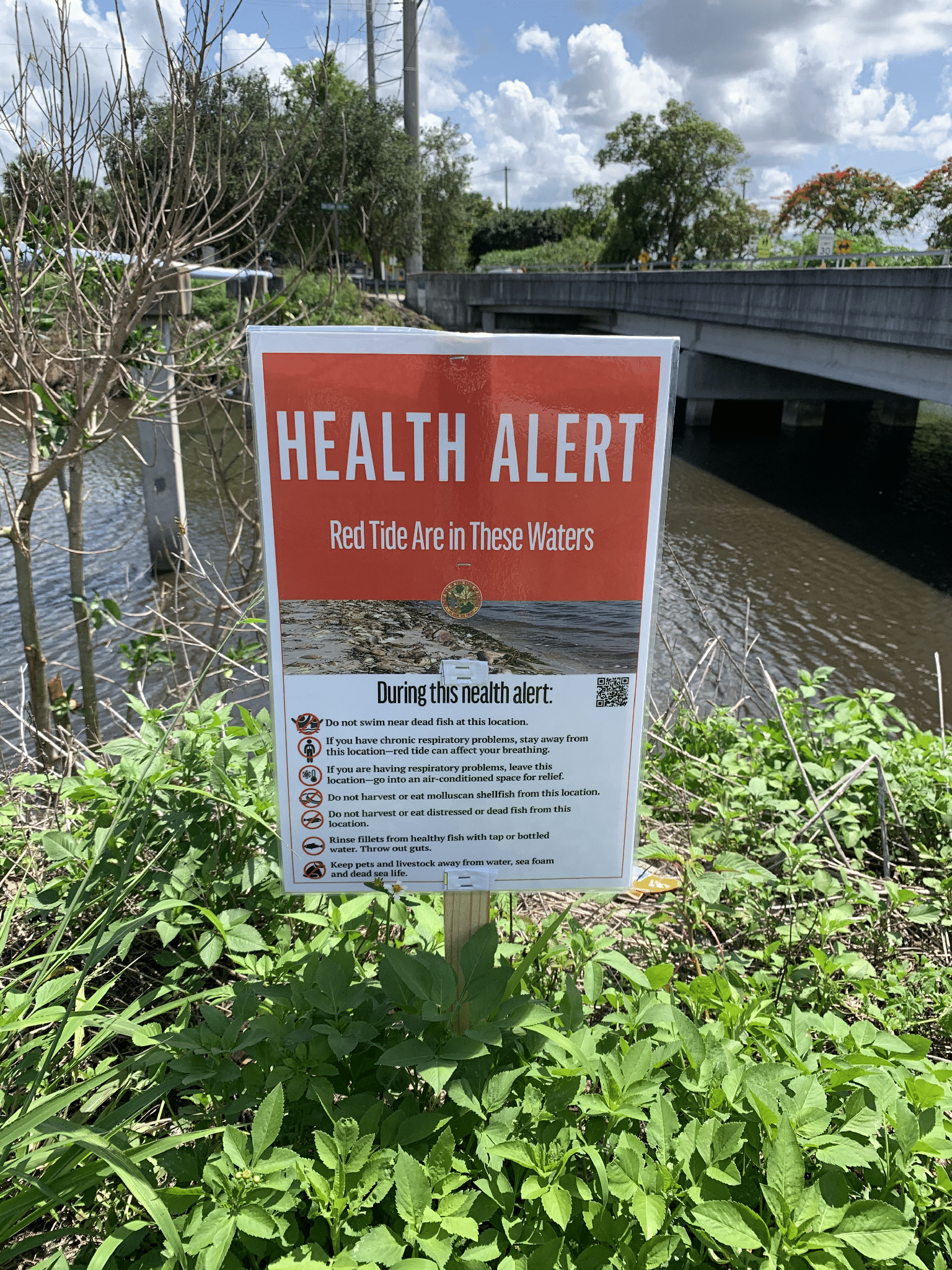 Red Tide signage mistakenly posted adjacent to an inland freshwater body experiencing a blue-green algae bloom. Canal Point, May/June 2020
The letter also requested that the Task Force develop and recommend specific criteria and requirements to FDEP and FDOH for notifying the public of risk from recreational exposure to blue-green algae. These criteria and requirements should involve numeric thresholds for recreational exposure to cyanotoxins as indicated in the comments submitted by Waterkeepers Florida for the FDEP Triennial Review on May 31, 2019. The Blue-green Algae Task Force must develop numeric thresholds in order to provide consistent state-wide protocols for FDOH County Health Units when cyanobacteria or other toxigenic algal species occur in public waters.

“The Florida Department of Health should have a policy for warning the public of risks from recreational exposure to toxic cyanobacteria that is more than voluntary by county health units. Until that happens the public will remain at risk,” said Calusa Waterkeeper John Cassani, the primary author of the letter. 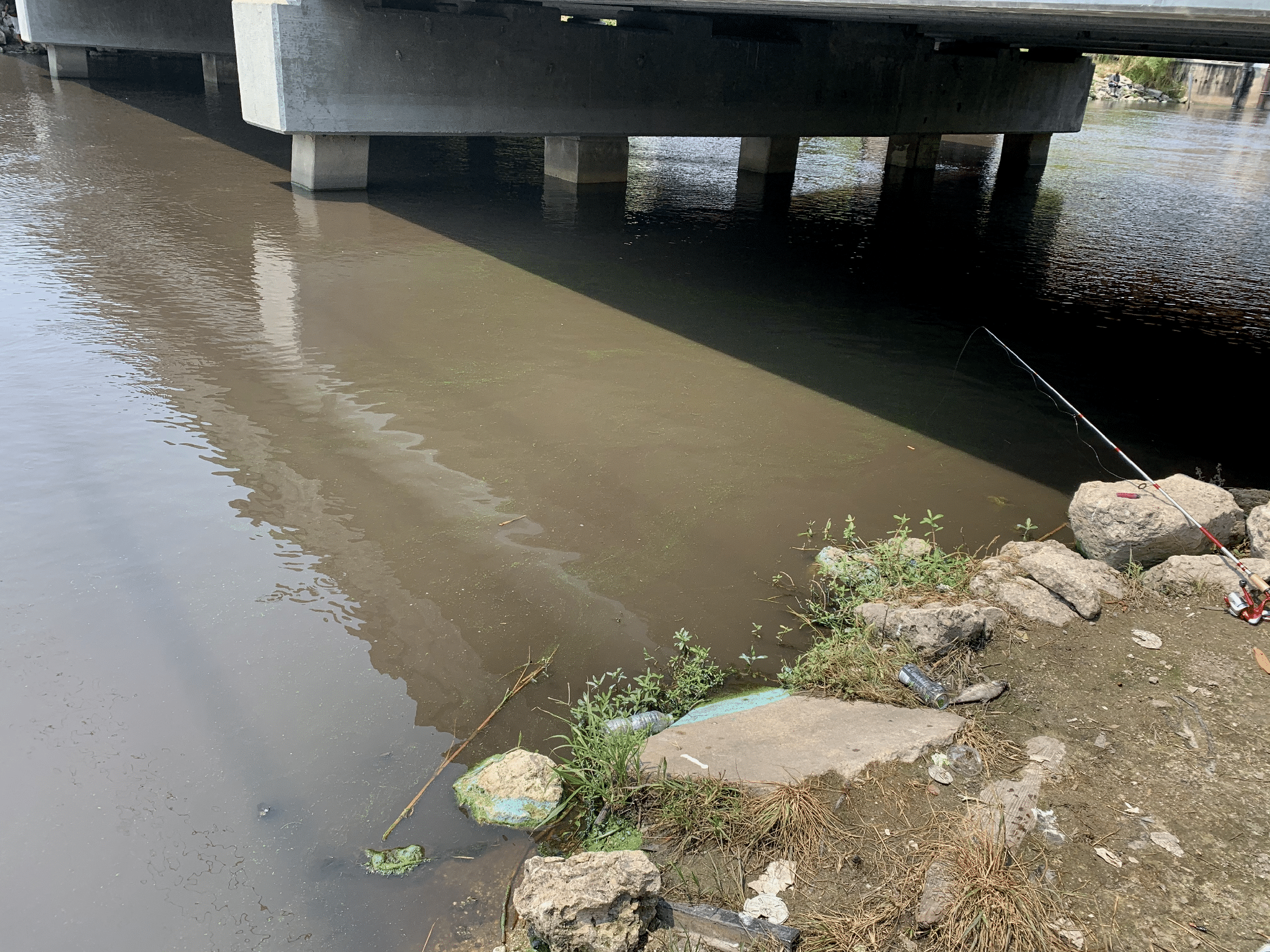 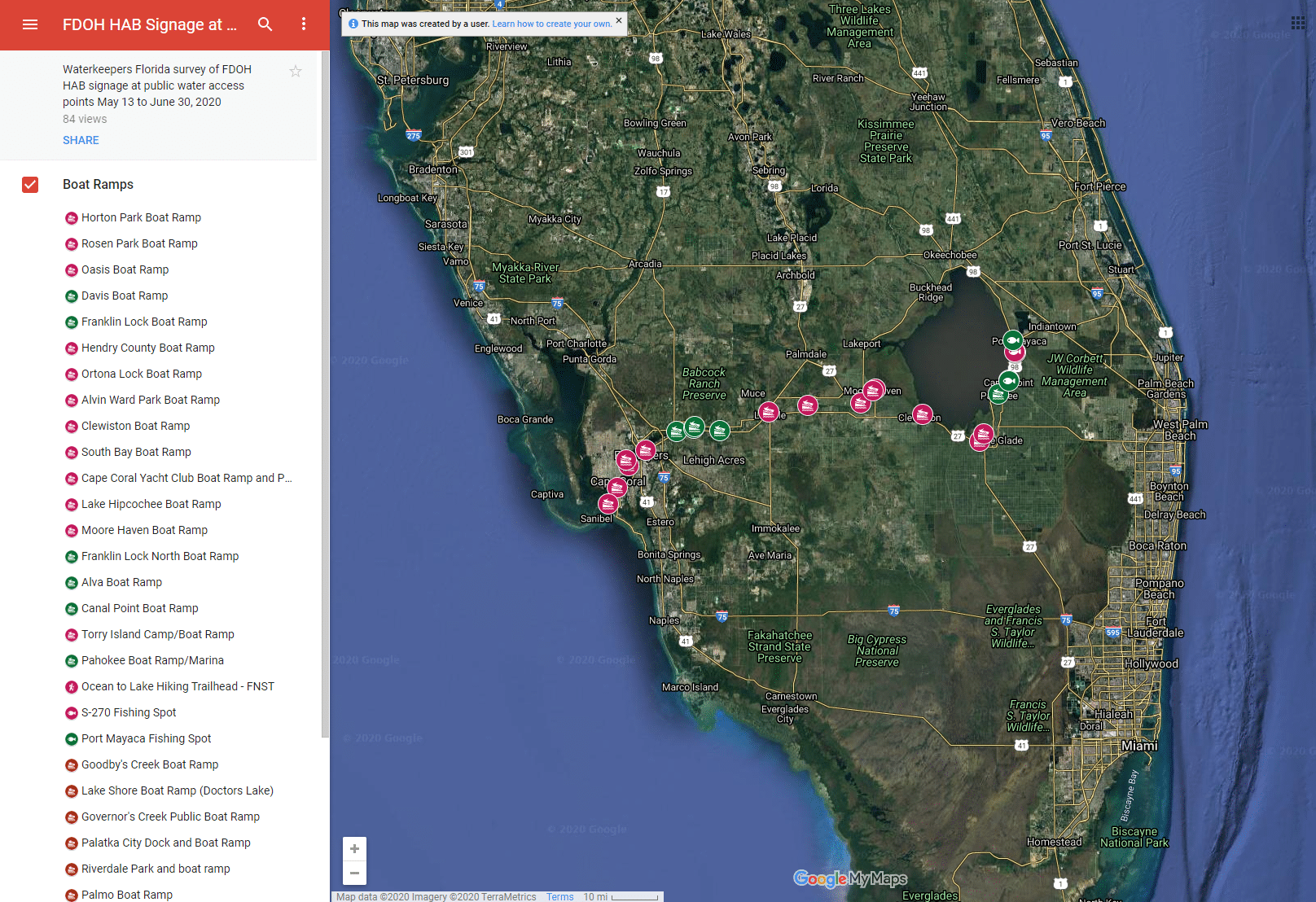 View an interactive map of public signage surveyed by Waterkeepers

About Calusa Waterkeeper
Calusa Waterkeeper (CWK) is a donation, member and grant-supported Fort Myers-based 501(c)3 whose mission is to “Protect and Restore the Caloosahatchee River from Lake Okeechobee to the Coastal Waters.” CWK’s project area covers more than 1,000 square miles of water, and its work includes testing and reporting, regulatory advisories, educational and community outreach and public advocacy. CWK is a member of the international Waterkeeper Alliance, the largest and fastest-growing nonprofit solely focused on clean water, with more than 300 Waterkeeper Organizations and Affiliates on the frontlines of the global water crisis, patrolling and protecting more than 2.5 million square miles of rivers, lakes and coastal waterways on six continents. 2020 marks the 25th year since the founding of CWK, and the 5th year working with the Waterkeeper Alliance.
About St. Johns Riverkeeper
The St. Johns Riverkeeper mission is to be an independent voice that defends, advocates and activates others to protect and restore the St. Johns River, Florida’s longest and most significant river for commercial and recreational use. As a “watchdog” for the St. Johns’ nearly 9,000 square-mile watershed, St. Johns Riverkeeper investigates threats, advocates for solutions and empowers citizens to protect our river, its springs, its tributaries and wetlands.
About Lake Worth Waterkeeper
Lake Worth Waterkeeper is a local nonprofit and member of Waterkeeper Alliance whose mission is to protect and restore the historic Lake Worth Lagoon and its surrounding waters from Lake Okeechobee to offshore waters.
About Kissimmee Waterkeeper
The advocacy jurisdiction of Kissimmee Waterkeeper begins in downtown Orlando and extends southward to the shores of Lake Okeechobee, an area of 4,100 square miles. It’s a complex, diverse landscape with hundreds of lakes dominating the northern and western sections and with expansive wetlands and prairies in its core.