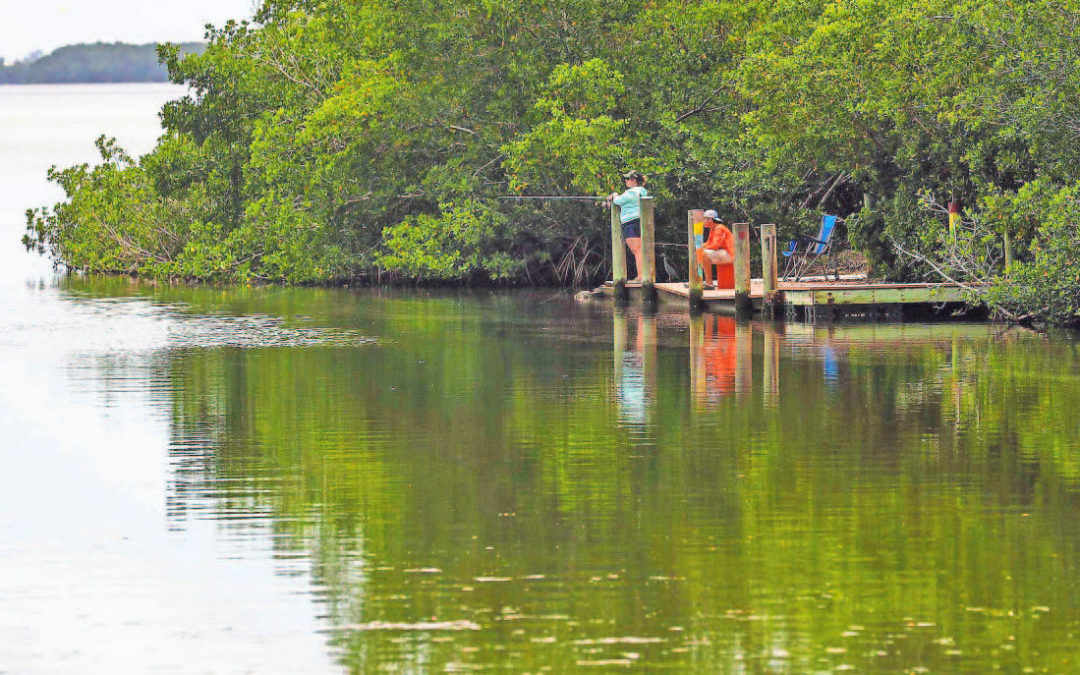 Originally published in The News-Press by Amy Bennett Williams on July 3, 2020

As it did a few months ago, foul water again surrounds Matlacha as the Fourth of July holiday looms, worrying residents and business owners.

Known for its vintage waterfront cottages, artsy vibe and first-rate fishing, the little canal-lined community on the way to Pine Island usually has somehow escaped the water quality disasters of the region’s past.

Starting this spring, conditions have fluctuated from intermittently icky to full-on dreadful. What the Florida Department of Environmental Protection is doing to measure or help remains unclear; the department did not immediately respond to a request for comment.

Last weekend was the worst so far, as area social media feeds filled with images and video of doomed sheepshead and snook gasping at the surface, twisting and flipping in hysterical circles.

They’re desperately trying to get oxygen, which the water lacks. Sanibel-Captiva Conservation Foundation research scientist Rick Bartleson shared an aerial photo with The News-Press of the water around Matlacha that shows a wide milky swath offshore.

When Bartleson tested the water in the white area, he found extremely low dissolved oxygen levels – “less than 1,” he wrote in an email. “anoxic, bad.”

Many of the words Karl Deigert uses to describe the situation, which includes stringy wads of algae and a sometimes piercing stench, aren’t printable. Deigert, a captain who owns Matlacha Boat Rides & Rentals, the Angler’s Inn Motel and serves as treasurer
of the nonprofit Lee County Rights of Nature said, “Matlacha waters are becoming a dead zone.”

Lately, that’s been the literal truth; the anoxia Bartleson measured is what leaves areas so oxygen-starved that the plants and animals that can’t flee die.

Chemicals in runoff from the surrounding landscape, including Cape Coral, fertilize the water, which causes a flush of algae growth, helped along by the warm weather, creating a series of interlocking death spirals. The lowered salt content kills creatures like oysters and clams that can’t swim away – that is if the heat hasn’t already done them in.

“We’re measuring water temperatures in the mid-90s,” Cassani said, “and thermal max (tolerance) is at or near that, so that heat alone could cause mortality in shellfish.” To make matters worse, their decomposing bodies, coupled with dead fish, seaweed and algae, also feed algae, driving the oxygen levels further down.

FGCU marine ecologist and Professor James Douglas sees Matlacha’s predicament as a fragment of a larger whole, “the many-headed hydra that is the nutrient pollution/eutrophication problem.” (Eutrophication is the process of fertilizer-fueled overgrowth of aquatic plants and algae.)

Douglass observes that algae blooms of all sorts are on the rise in Southwest Florida waters – be they fresh, salty or brackish, suggesting that people have yet to make “any meaningful progress in reducing nutrient loading.”

Douglass points to the ongoing herbicide treatment of aquatic plants in stormwater areas as well as natural lakes and wetlands, booming sales of fertilizer in big box stores (even during local fertilizer bans) and chronic wastewater spills excused by government agencies that continue to permit wetland destruction.

“With no end in sight for the nutrient pollution problem and ever-hotter temperatures on the horizon, we’re getting to the point where there’s something awful happening in the water more often than not.”

What galls Cassani is that this ecosystem collapse is happening in an area that’s supposed to be preserved.

“To see it in a state aquatic preserve with a non-degradation standard and entitled to the most protection Florida’s DEP can offer is a tragedy.”