Gov. DeSantis Takes a Look at Pilot Algae Treatment in the Caloosahatchee 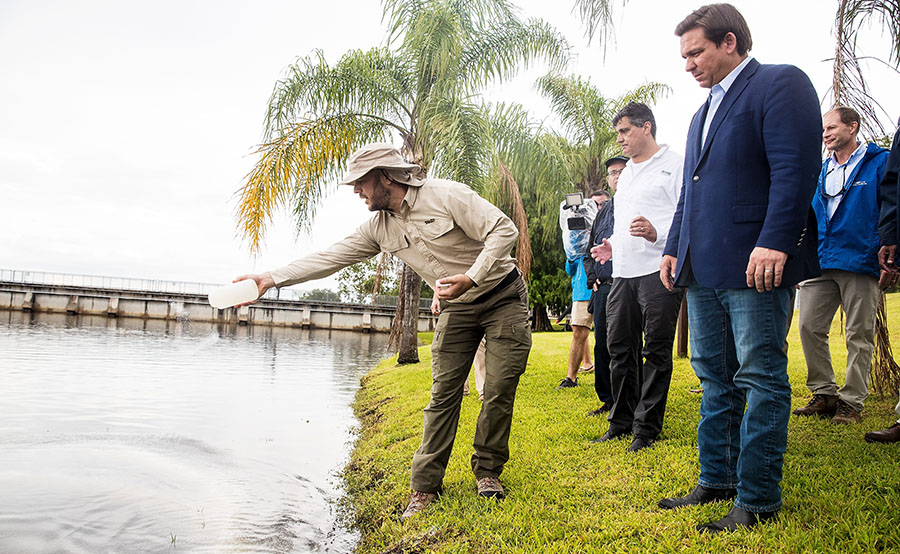 Originally published by The News-Press on June 4, 2021 by Amy Bennett Williams


As an Israeli flag fluttered under Old Glory, Florida Gov. Ron DeSantis stood on a Caloosahatcte River shoreline far less foul than it was the week before.

He’d traveled to the W.P. Franklin Lock in Olga for a briefing on a pilot algae treatment begun there in May.

What’s made the difference in the water is Lake Guard Oxy, a powdered algaecide that uses oxygen to trigger cyanobacteria to commit ‘collective suicide,” as Eyal Harel, the CEO of BlueGreen Water Technologies characterizes it. Harel’s company, headquartered about 15 miles southwest of Jerusalem, has been dusting the water surrounding the lock regularly with the white granules since last month.

Cyanobacteria, also called blue-green algae, is a global problem, Harel says. Though the microorganisms occur naturally, overgrowth can choke waterways, and some produce potent toxins. Harel likens it to a bacterial infection. “If you don’t treat it, it just gets worse in frequency and severity,” he said.

But environmental groups have raised questions about the effects the algaecide might have on wildlife, as well as the humans who apply the stuff.

DeSantis also wondered about that: “Have there been any negative side effects from the algaecide?” he asked Harel.