How Much Dangerous Algae Toxin is in the Air? 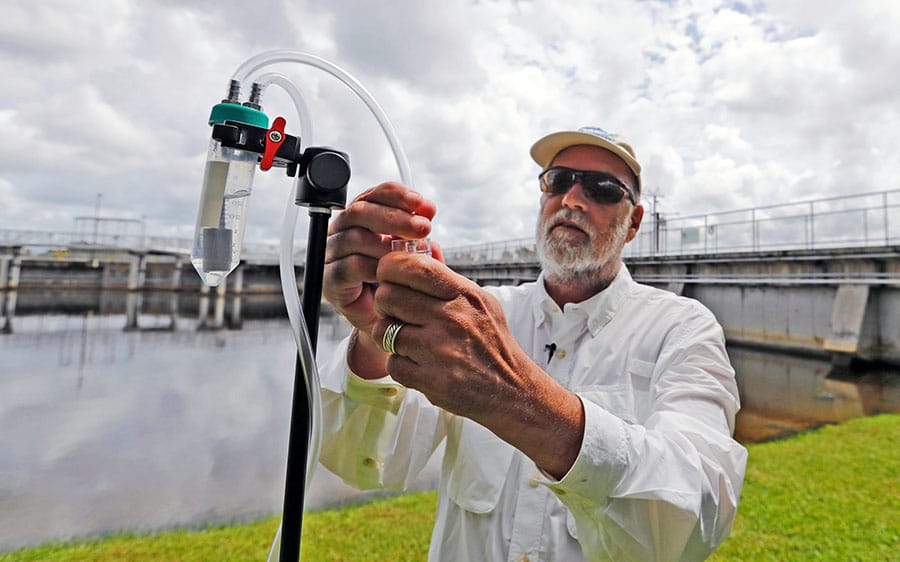 Originally published by The News-Press on July 10, 2021 by Amy Bennett Williams

It’s not a good idea to swim in water tainted with toxic blue-green algae, but is it dangerous to live and breathe along an algae-choked water body? Are fishing guides at risk?

A local water quality group is stepping up to do what the government doesn’t.

Calusa Waterkeeper is checking the air for cyanotoxins, produced by microscopic organisms that photosynthesize as plants do, but are indeed bacteria, even though they’re commonly called blue-green algae. Some produce potent toxins that have been linked to grave health problems, including liver cancer and neurodegenerative diseases like Parkinson’s.

The nonprofit has created a first-of-its-kind sniffing device that can test the air around blooms for toxins. That DIY ethic has come to characterize the group, which operates on a slim budget, but packs a board with hefty scientific firepower.

Members collaborated with each other, picking the brains of other algae researchers to engineer and build the portable toxin sensor, dubbed ADAM for Aerosol Detector for (Harmful) Algae Monitoring.

With a price tag of less than $600, ADAM looks like a cross between a trumpet case and a high-end cooler and a with twin latches and a recessed carrying handle. Nestled inside each unit (there are two so far) is a battery-driven air pump, tubing, bottles, gauges and more that attach to a fold-up pole that extends to a head-high (about 5 feet) “breathing zone” from which air is collected, then sent for testing. Wyoming’s Brain Chemistry Labs will donate the analysis, which would otherwise be prohibitively pricey.

Eventually, the results will appear on the nonprofit’s website.

“This is leading edge,” said scientist and board member, Manuel Aparicio, who led the project to develop the device. “People are starting to look at all aspects of (health risks of cyanotoxins),” he says, and a critical first step is knowing how much is in the air. “So we’re trying to be as sober and objective as possible, because there aren’t any health standards yet,” Aparicio said. “The intention is to measure not just for advocacy, but to get it out to the public.”

Science is still learning about cyanotoxins, with research ongoing in many quarters.

Some of what is known isn’t reassuring, Calusa Waterkeeper John Cassani says, especially about inhaled toxins. Even though airborne toxins occur at a much lower concentration than in water at the source of a bloom, inhalation increases their potency.

“It’s more bioactive – like 10 times more bioactive,” Cassani said, “because it goes straight to your blood-stream when you inhale it,” unmediated by digestion.

For reasons both legal and scientific, Cassani says his organization will be careful not to frame the results as recommendations or advice. “It would be up to you to make an interpretation. The minute we say something is risky or dangerous, then we’re subject to all kinds of problems.”

But bit by bit, scientists from a variety of agencies, institutions and nonprofits are piecing together what Brain Chemistry Labs has dubbed the toxic puzzle.

Some of what we’ve learned so far:

Yet despite mounting evidence that cyanobacterial emissions are a genuine problem, Florida government agencies so far haven’t ventured to answer some of those concerns. That leaves citizens in the dark on what’s in the air and what the risks might be, hence the need to empower people with knowledge, Cassani says.

“Unfortunately, there isn’t enough information on the long-term impact of these blooms, but we are witnessing the immediate adverse effects on our environment and community in real-time,” Donalds wrote in an email. “I am thankful that there is more interest in these blooms and the toxins they produce, and I support efforts to assess this issue and spread awareness. It is exciting to see the government and nonprofit organizations take a multi-faceted approach to this critical issue.”