Officials Ready Mullock Creek to Drain Floodwaters, but at what Cost to the Environment? 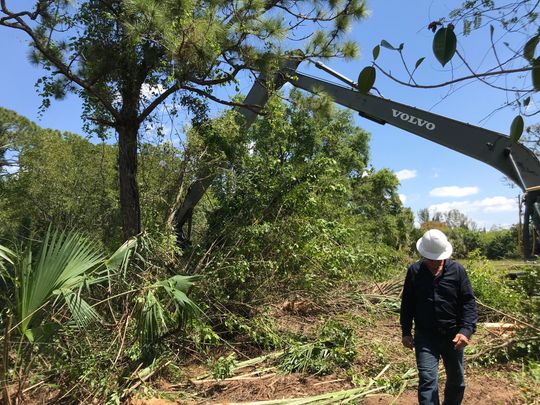 As reported by Amy Bennett Williams of The News-Press on Mar 27, 2019.

Chainsaws growling, workers have started taking big bites out of the tangle of exotic plants that have all but choked off Mullock Creek in south Lee County.

With headwaters just east of U.S. 41 near San Carlos Park, the creek, which flows to Estero Bay, is part of the Outstanding Florida Waters program, named by state statute to be “worthy of special protection because of their natural attributes.”

The creek clearing is one of 13 such projects that Lee County and the South Florida Water Management District are tackling together following disastrous flooding in 2017. Other waterways on the list are the Estero, Orange, and Imperial rivers, as well as Bedman, Cypress, Daughtrey, Halfway, Hickey, Leitner, Oak and Spring creeks and the Kehl Canal.

Calusa Waterkeeper John Cassani points out that the surrounding already-developed and built-up environment contributes to the accelerated runoff that can lead to flooding in the first place.

“Is it time for revisiting how development is permitted in the various jurisdictions and by the relevant agencies?” Cassani asked. “I see this project as an effort to give some comfort to the flood victims, to create the perception that real flood control management is at work, as opposed to addressing the actual underlying causes. The collateral damage is, we’re impacting (the creek) and ultimately, the Estero Bay preserve.”