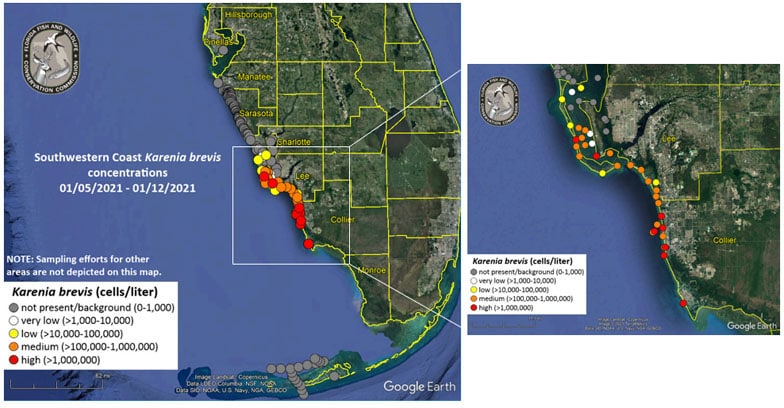 Originally published in Florida Weekly by Roger Williams on January 13, 2021

FWC maps — that’s the Florida Fish and Wildlife Conservation Commission, which pays attention to things that decimate the environment — are now showing almost 45 nautical miles of Gulf coast from Captiva Island south to Marco Island in the grip of an invasive force of single-celled terrorists. They resemble tiny four-chambered hearts with squiggly tails: the dreaded Karenia brevis.

“Here we are, another red tide bloom coming on the heels of more than two months of (excessive) releases from Lake Okeechobee by the U.S. Army Corps of Engineers,” said a frustrated John Cassani, the Calusa Waterkeeper.

The most obvious signs last week: discolored water, dead fish and residents or tourists on or near beaches sometimes struggling to breathe comfortably.

There are less obvious signs, as well.

While other researchers at such places as the Mote Marine Laboratory look for its causes and ways to inhibit red tide, Dr. Mike Mullan, executive director of the Roskamp Institute in Sarasota, will arrive on Sanibel Island this week to continue a study of its effects on human beings.