Professional and Personal Background
Before I hung my hat in Bonita Springs, I lived in many places, all of which share a common trait: a connection to water. As a child, I sailed and swam in the Chesapeake Bay, and where I got my first paid job as a reporter/photographer fresh out of college. This experience exposed me to the Save the Bay movement, which at the time was pioneering local efforts to prevent non-point source pollution.

The two pillars of my life are being by the water and my beloved husband – both of which keep me centered. He and I met in Connecticut where we both taught history. Working for nearly three decades with teenagers of all stripes helped me appreciate the varieties of human understanding. The fields of history and environmental science have a lot in common –analyzing primary source data, understanding change and continuity over time, distinguishing cause and effect. I like to think that these parallels help me transfer some of the skills I acquired as a history educator and apply them to our work as Rangers. There is also the challenge of trying to make sense of public policy and human psychology. But that is another story…. 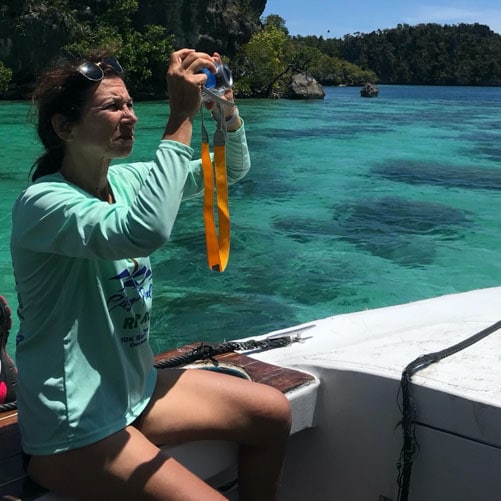 What motivated you to become a Ranger?
My past exposure to the Save the Bay movement was certainly a factor. Thirty-five years later, I had the opportunity to work in East India for a semester on a Fulbright grant. I was appalled by the lack of water infrastructure and the utter disregard for the environment. Later, when I moved to Florida, I naively thought (like so many other former snowbirds) that I was entering an aquatic paradise. Boy was I in for a rude awakening! Living here year-round I was stunned by the degree to which marine and estuarine quality had declined since my first trips to Sanibel in the 1970s. Perplexed, I asked myself: “Am I back in India? This doesn’t make sense – how could such a beautiful place allow itself to degrade the very things that make is so attractive?”.

This contradiction led me to enter the Florida Master Naturalist Program to learn more. For certification, I researched a capstone project on public perceptions of water quality issues in southwest Florida. I demonstrated that public access to accurate, clear and meaningful information about water quality is frustrated by obscure, outdated or incomplete reporting by a plethora of government agencies. Around that time, a friend told me about the Calusa Waterkeeper Ranger program. What a godsend! This allowed me to take my newly minted Master Naturalist certification and help with environmental stewardship, despite my lack of professional experience in science. Calusa Waterkeeper is trying to address the very issue I presented in my capstone. That was very motivating.

What do you like doing most as a Ranger?
I love that the Rangers are an eclectic community of savvy, passionate people who share the dream of achieving swimmable, fishable and drinkable water. The people in the Estero Bay Zone team are simply extraordinary! They inspire me to learn more about science and public policy and apply what we learn to influence our communities to do a better job as stewards of our environment. It’s fun to do little things – like taking water samples or measuring water clarity with our Secchi discs – and it’s energizing to have others working for a common goal. John Cassani has done a remarkable job in empowering Rangers to engage in citizen science throughout our watershed. It’s a privilege to have his guidance.

Why did you choose southwest Florida as home and if not a native, when did you arrive?
My parents vacationed on Sanibel beginning in the 1970s. They later retired there, and my husband and I were frequent visitors, as were my brother and his family. Some of my happiest family moments are associated with this area. My parents were actively involved with the Sanibel Captiva Conservation Foundation and my dad served as Vice President to the Sanibel Captiva Audubon Society. After he died, we visited Mom several times a year. She was an enthusiastic volunteer at the SCCF native plant nursery. I credit them with instilling in me the value of serving the community. When Mom’s health took a turn for the worse, I opted for an early retirement to live near her in 2015. This time coincided with alarming episodes of harmful algal blooms, gushing brown water via the Caloosahatchee River, and growing public awareness about water quality.

What is your favorite waterway and why?
The waterways connecting Estero Bay, Bonita Beach and Lovers Key State Park are my top picks. I love kayaking the mangroves and the passes between the Bay and the Gulf – I can pretend for a moment I am a Calusa Indian or a Spanish explorer, despite the occasional roar of a jet flying overhead. Estuaries are the nurseries of the sea, and the life they sustain is endlessly fascinating – and vital. On the first Monday of each month, I do water sampling and testing before dawn for the Charlotte Harbor Estuaries Volunteer Water Quality Monitoring network. My site is at the boat ramp at Carl Johnson State Park. It is so serene and beautiful at that time of day – roseate spoonbills, egrets, despite an occasional manatee or dolphin – truly a spiritual moment.

Why is protecting the water important to you?
Living in Florida is a privilege, and with that privilege comes the responsibility of stewardship for our natural resources. To enjoy the blessings of our beautiful state, we need to overcome partisan and regional differences to protect our water and the lands that affect our waterways. Springs, creeks, rivers, estuaries, the River of Grass of the Everglades, the Gulf and the Atlantic are all parts of a whole that make Florida unique. In many respects, Florida is ‘the water state’. Protecting those waters is a matter of existential urgency for Floridians.